Loading posts...
Home English In the land of mountains: A road trip in Montenegro

Now reading: In the land of mountains: A road trip in Montenegro

In the land of mountains: A road trip in Montenegro

The small Balkan country is still an insider’s tip, but the number of tourists is rising. Most are drawn to the Adriatic beaches, but now the country wants to attract visitors to the mountains, like the Durmitor massif.

With an area of around 14,000 km² (5405 mi²), Montenegro in southeastern Europe is only as big as the German state of Schleswig-Holstein. It offers an enormous variety of landscapes in a small area. That is another reason why the number of tourists is rising rapidly. So now is the best time to discover Montenegro before everyone else does.

“We have a joke that goes like this: If Montenegro could be flattened, it would be the biggest country in the world,” says Andri Stanović as he looks out of the car window into the barren mountain landscape. Montenegro — the country of the black mountains — is in fact almost completely covered by mountains. They drop steeply to the Adriatic coast in the south and tower up to high peaks in the north. Stanović’s work for the National Tourism Organization of Montenegro is to make its country better known as a holiday destination, and beside the heavily frequented tourist beaches on the Mediterranean Sea and the famous Bay of Kotor, to make the wild mountain world accessible to visitors as well.

“Montenegro has extremely diverse landscapes. This is something other countries in the region don’t have,” he says. The small country in the Balkans has a lot to offer: the coast in the south, high mountains in the north, the largest lake in the Balkans, primeval forests, deep gorges and five national parks. 6,000 kilometers (3,728 mi) of hiking and cycling trails run through Montenegro, covering an area of just 14,000 km² ( 5,405 mi²) — smaller than the German state of Schleswig-Holstein. Montenegro is still more of an insider’s tip, but the number of tourists is rising steadily. 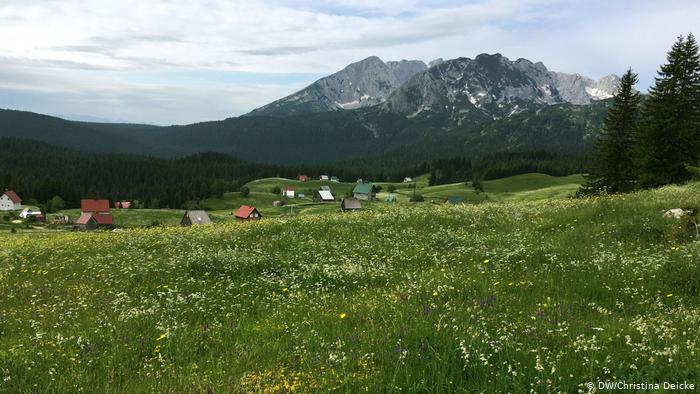 The Durmitor Mountains in Montenegro (DW/Christina Deicke)
Wide valleys, high mountains: the Durmitor mountain range in the north of Montenegro

We begin our tour in the ski resort Zabljak. It is located at an elevation of 1,500 meters (4,921 ft.) and is therefore the highest town in south-eastern Europe. In summer Zabljak is sleepy; only a few hikers can be seen in the resort.

By car, you can drive along the Durmitor Ring, one of four panoramic roads on which you can explore the mountains of Montenegro. Only two of the routes have so far been signposted, however. The third is to be ready by 2020. And the fourth? “Let’s have a look,” says Andri Stanović. Also on board is a GPS-controlled audio guide, which is available as an app in several languages. Stanović, like me, is doing this tour for the first time.

The voice from the smartphone promises us information about “things you see and about things you don’t see”. Relaxed guitar music plays; dark spruce forests rush by outside. A first stop: We have a clear view over mountain meadows to the distant Durmitor massif. How it got its name is a matter of opinion. One theory is that it could derive from the Latin “dormire” and mean as much as “sleeping mountain” or “mountain on which the gods sleep”. It has 48 peaks that are higher than 2,000 meters (1.2 mi). 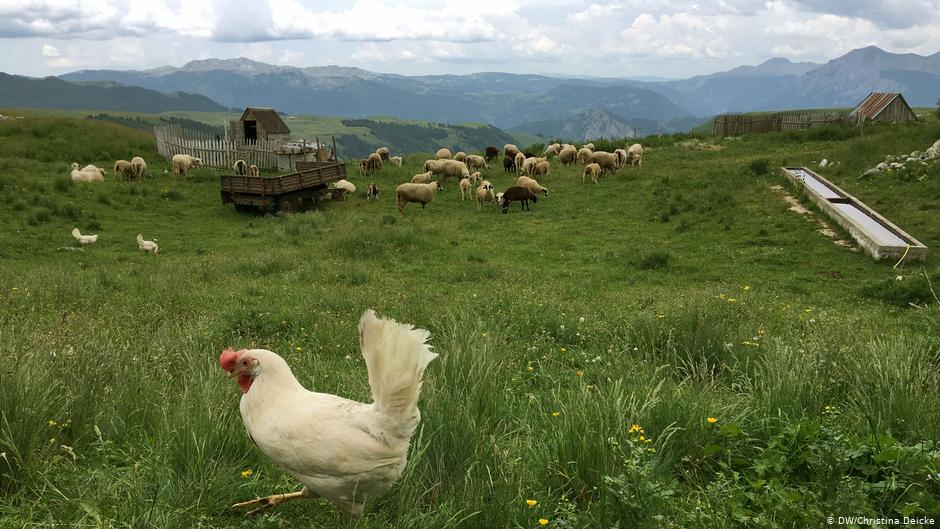 We drive on. In the distance little huts are soon visible. Like colorful pebbles they are scattered across the plain. This is a Katun, a mountain village where farmers live with their cattle: Cows, sheep and goats from whose milk they make cheese and butter.

“Only 14 people live in the village all year round,” the voice from the smartphone audio guide explains. In winter it is completely cut off from the outside world by snow. But what about emergencies? “Then a helicopter is deployed,” says Andri Stanović. “In winter, the panoramic road is also closed. If you come in spring or autumn, you have to find out beforehand whether the route is open to traffic”.

Seclusion in the long run is not everyone’s cup of tea. More and more people living in mountain villages in Montenegro prefer to move to the city. The traditional way of life of the mountain herders is slowly dying out. 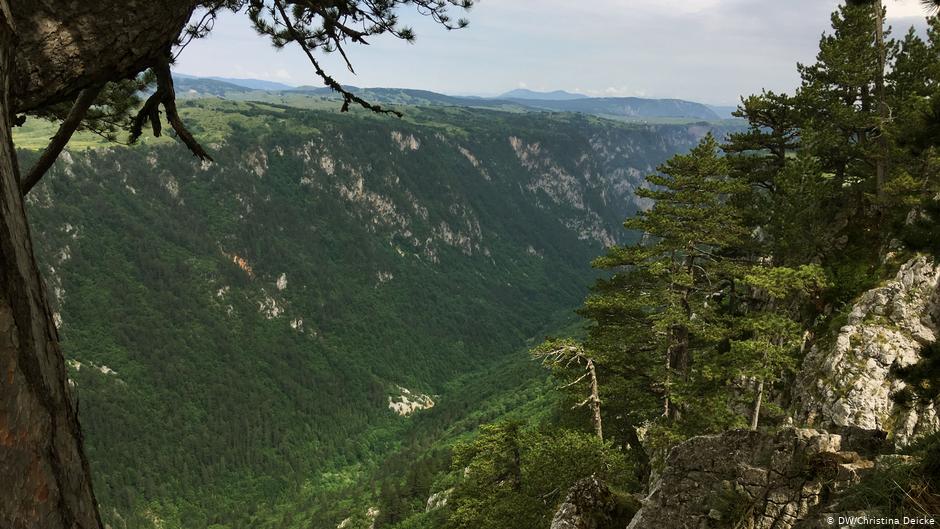 Long stretches of the panoramic road pass through Durmitor National Park, which was founded in 1952. There are more than 1,600 plant species here, including many indigenous ones that can only be found here. About 50 species of mammals live here, including wolves, brown bears, lynxes, chamois, golden eagles and grouse. Admission to the park costs three euros (3.38 USD). It has been a UNESCO World Heritage Site since 1980.

At the suggestion of the audio guide we stop at the roadside and walk along a path until a gorge opens up in front of us. “Don’t go too close to the edge. There is a risk of falling,” it warns. The 15-kilometer (9.3 mi) long Sušica Gorge is 700 meters (2,297 ft) deep — a spectacular sight, shaped by tectonic forces and the Sušica River.

We head downhill. The narrow road becomes extremely curvy, and on either side there is a sheer drop. The slopes are not secured: rock-falls are not uncommon. As if to prove the point, our driver stops to clear a rock the size of a football from the road. Only experienced drivers should venture along this route. We rarely encounter any cars, but when we do, nerve-wracking maneuvers are necessary to pass each other by. The route is not recommended for recreational vehicles over seven meters long or 2.3 meters (7.5 ft) wide. 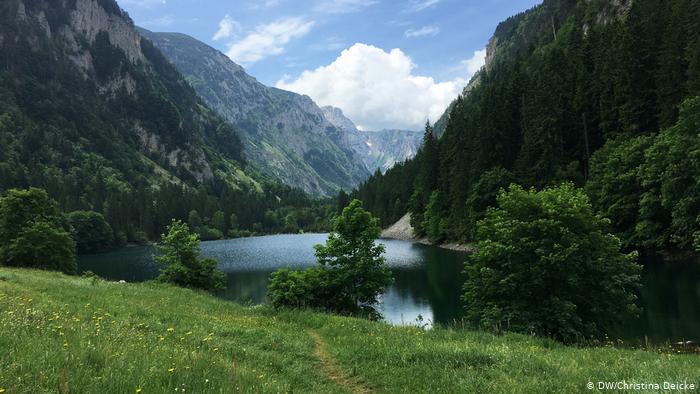 Lake Sušičko in the Durmitor Mountains (DW/Christina Deicke)
Timing is everything: Lake Sušičko exists only at certain times of the year.

Behind the next bend another breathtaking sight awaits: In the valley Lake Sušičko shimmers green. Quiet and lonely, it’s located between the rock walls. There are only two tourists walking on the shore path. By the time we reach the valley, they too have disappeared. 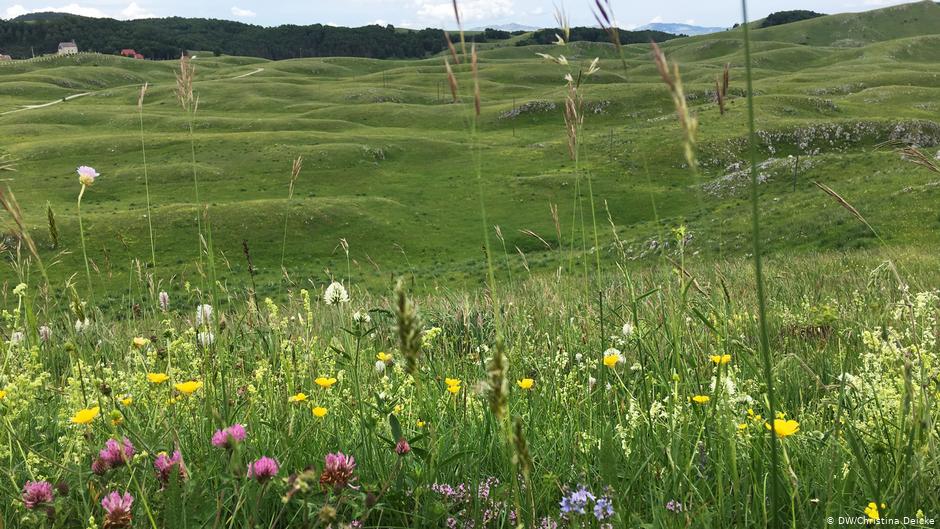 If you want to see this lake, you have to be lucky: “In summer it dries up completely,” our audio guide explains. There is a mountain hut on the shore. Hikers can spend the night here for about ten euros per person. A hiking trail starts from here and leads seven kilometers (4.3 mi) to two more mountain lakes.

The car again struggles uphill. We reach a plateau covered by a carpet of flowers on which cows graze. It could be the location of a fantasy series. It smells of wild thyme, while crickets and birds chirp. Otherwise there is silence — until several motorcyclists come rattling along. “Motorcycle tourists from all over Europe come here,” Andri Stanović explains. “Montenegro is a huge playground for them because of its winding roads.” 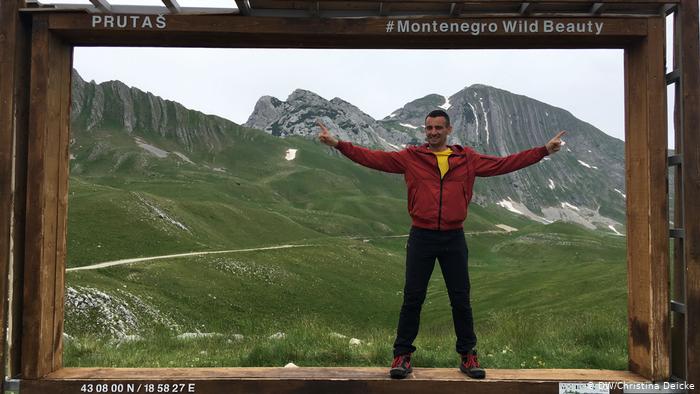 Tourists can pose in a huge picture frame in the Durmitor Mountains (DW/Christina Deicke)
The framework for tourism has been built: Andri Stanovic at the photo stop in front of Prutaš

As we drive further up into the Durmitor mountains, the lush meadows give way to stony terrain. The mountains are part of the Dinaric Alps and were formed by tectonic plate movements. The audio guide plays interviews with inhabitants from the region and sound samples of the traditional Montenegrin single-stringed instrument, the Gusle, and it names the surrounding mountains and their elevations in meters.

We’re about 1,800 meters (1.1 mi) high now. In front of us the peak of Mount Prutaš rises up, at 2,393 meters (1.49 mi). Snow shimmers in some crevices, and it is about 15 degrees Celsius (59 degrees Fahrenheit). According to legend, it was fairies who scratched the prominent structures into the rock of the mountain with their fingernails.

We make our last stop at 1,907 meters (1.18 mi), on the Sedlo Pass. This is the starting point for several mountain trails, such as Bobotov Kuk, at 2,523 meters (1.57 mi), the highest peak in the Durmitor massif. Two women in outdoor gear can be seen scrambling up the slope, small as ants in the valley in front of the mountain range.

For tourism expert Andri Stanović, the concept of the panorama road has been a success: “We have had 40 percent more visitors to Durmitor National Park since the route was opened in autumn 2018,” he says.

After about four hours and 76 kilometers (47 mi), we are back at our starting point in Zabljak. From here we make a detour to Black Lake. It is regarded as a tourist highlight in Montenegro. From the parking lot many holidaymakers flip-flop their way in bathing sandals towards the lake. A Chinese woman with a straw hat and — oh yes, high heels — totters along in front of us. Once on the shore, she poses for photos with a purple dotted parasol.

Black Lake is one of 18 glacial lakes in the Durmitor Mountains. They are also known as the “eyes of the mountains”. Black Lake’s name comes from the dark conifers that frame it. A picturesque backdrop — but after the solitude of the mountains the hustle and bustle of people amounts to a kind of culture shock.

On the four kilometer path around the lake there are various opportunities to stage yourself in a photo: footbridges, frames, rustic benches. Tourists from all over the world pose for an Instagram post: “And that’s not all,” says Andri Stanović. “When the lake’s water level drops in summer, even more footbridges and platforms appear.”

The mountains of Montenegro are the perfect backdrop for a photo that will look like an outdoor wilderness and adventure photo. The good thing here is that if you want to, you can actually experience the outdoor wilderness adventure — and still do so quite undisturbed. Alternatively, you can take a comfortable round trip by car.

Editorial note: The article was written as part of a press tour Deutche Welle